As seen in the July 1, 2014 issue of Bicycle Retailer and Industry News:

BEND, OR – You may be proud of your new mountain bike purchase and its stout through-axle design, but say goodbye to trailers and trainers. That is until you purchase Robert Axle, an aftermarket 12-millimeter trailer-compatible through-axle that allows trailer hitches to bolt on and enables full-suspension bikes to mount on trainers. “Most new bike customers don’t realize that upgrading to a through-axle means their bike is now incompatible with trailer hitches and trainers,” said Chris Kratsch, Robert Axle president. Kratsch, a trail coordinator for the Central Oregon Trail Alliance, was not happy when he found he could no longer tug his BOB trailer on maintenance runs with his new bike. So he developed the Robert Axle at first to pull the BOB, and later expanded compatibility to other trailer systems. Currently 12-millimeter axles are offered in the three popular thread pitches, substituting for Maxle, Syntace and other OEM axles. Hitch axles sell for $52 to $57, depending on application. And they with work with BOB trailers as well as hitch-mounted child and cargo trailers by Burley, Chariot, Croozer and others. Axles also work with yoke-mounted trailers like Extrawheel, and the trainer axles work with most bike resistance trainers. The company is looking at offering something similar for fat bikes. 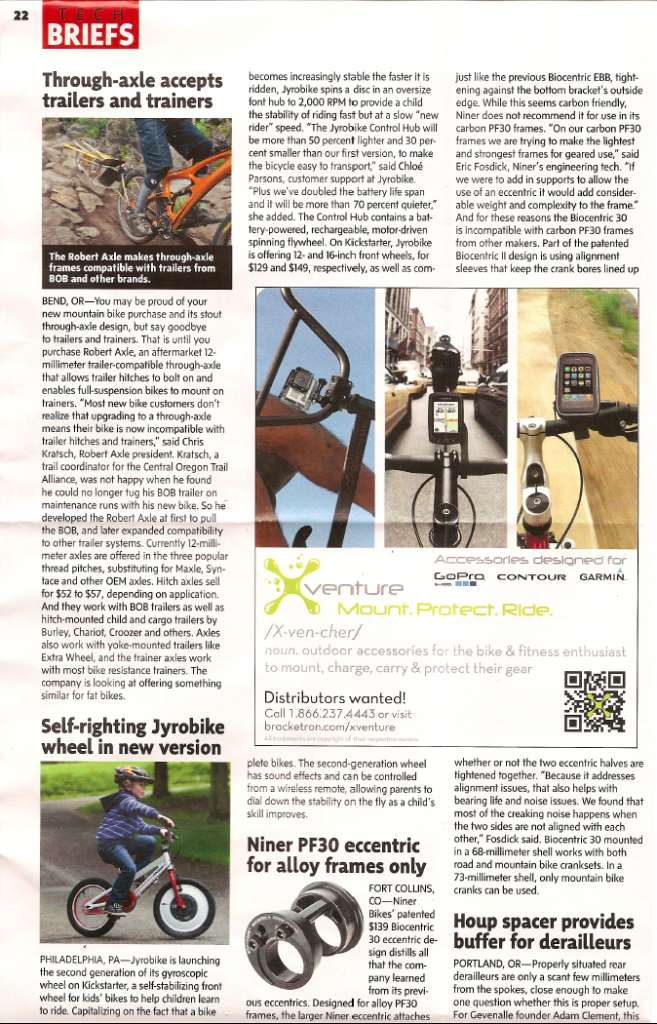