It has become a Robert Axle Project tradition to spend Memorial Day Weekend out in the wilds bike touring in our amazing backyard we call Oregon. We’ve dubbed it “Motor Free Memorial Weekend”, and although we may drive somewhere to start the tour, we spend three days “motor-free”, mountain bike touring with friends.

As a passion-driven business it is so important (and so hard, sometimes) for us to take the time to do what we love. That’s why we got into this business in the first place, right? To help others experience the adventure of traveling by bicycle. Winding around that next bend in the road to see places that we’ve never seen, or climbing up what seems to be an endless grind to nowhere. Those are the moments in time that get us all giddy about the work that we do.

This year, we explored the southeastern boundary of Oregon, otherwise officially known as BFE. The four of us headed out with a mishmash of bikes and gear, ranging from full suspension carbon mountain bikes to fully rigid steel bikes. Two of us had BOB trailers and two of us had a mix of Old Man Mountain racks and panniers and bikepacking gear. The point? Good gear is great, but no matter what you have or want as your bike touring set up, just try to make it work, so you can just get out there and ride.

Day 1 took us a few miles on paved road, where we then turned up to climb a 2,200 foot climb on a dirt road. About halfway up, we found some singletrack leading to a viewpoint with expansive views of the valley, lakes and dry lakebeds below. It’s hard to not feel small in this country. Lucky for us, we had delicious hot springs at camp that night to soothe the quads and recharge us for the next day.

Big skies and lonely roads. The signature of Eastern Oregon. 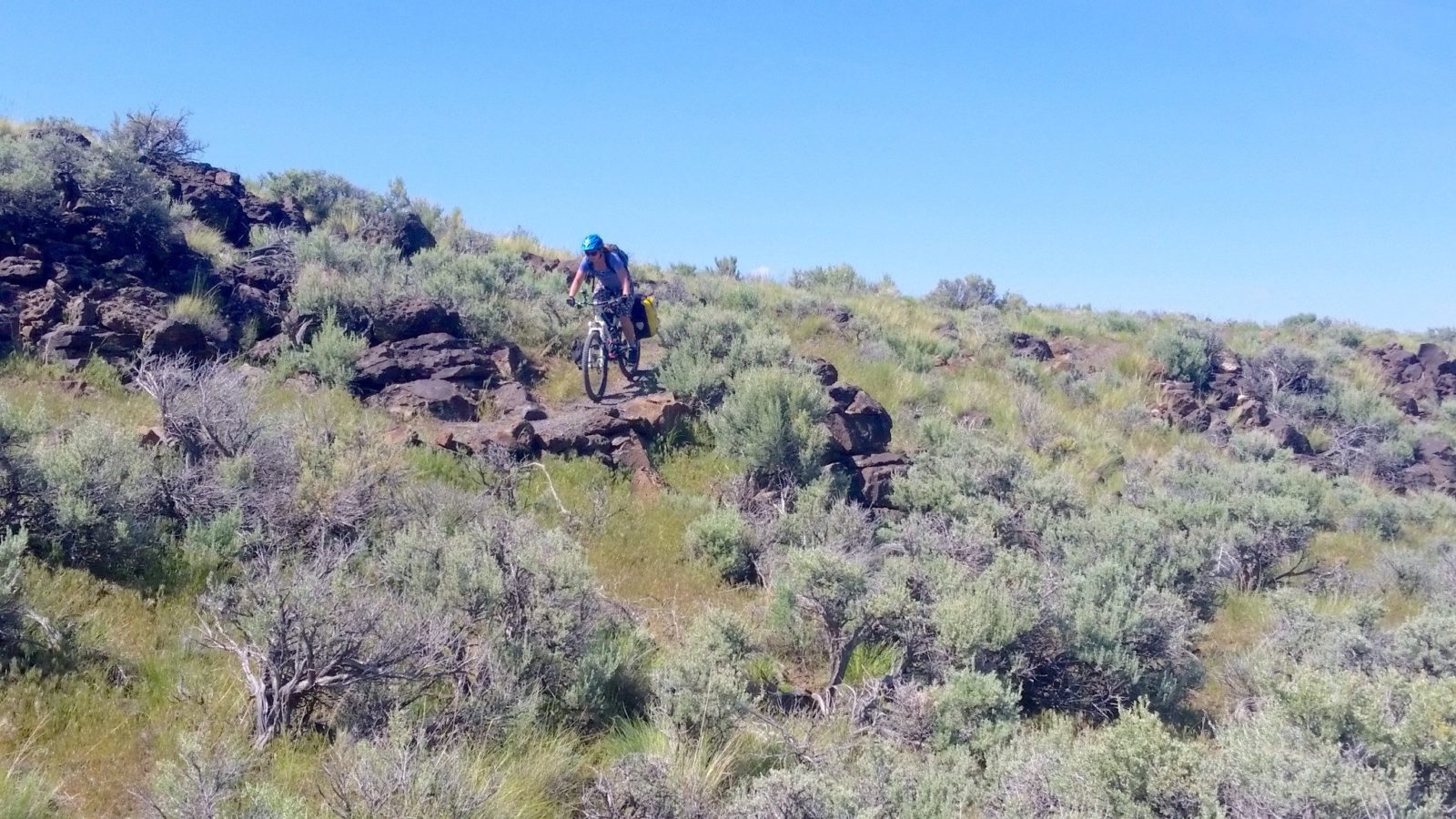 It’s always fun to find a little singletrack along the way. 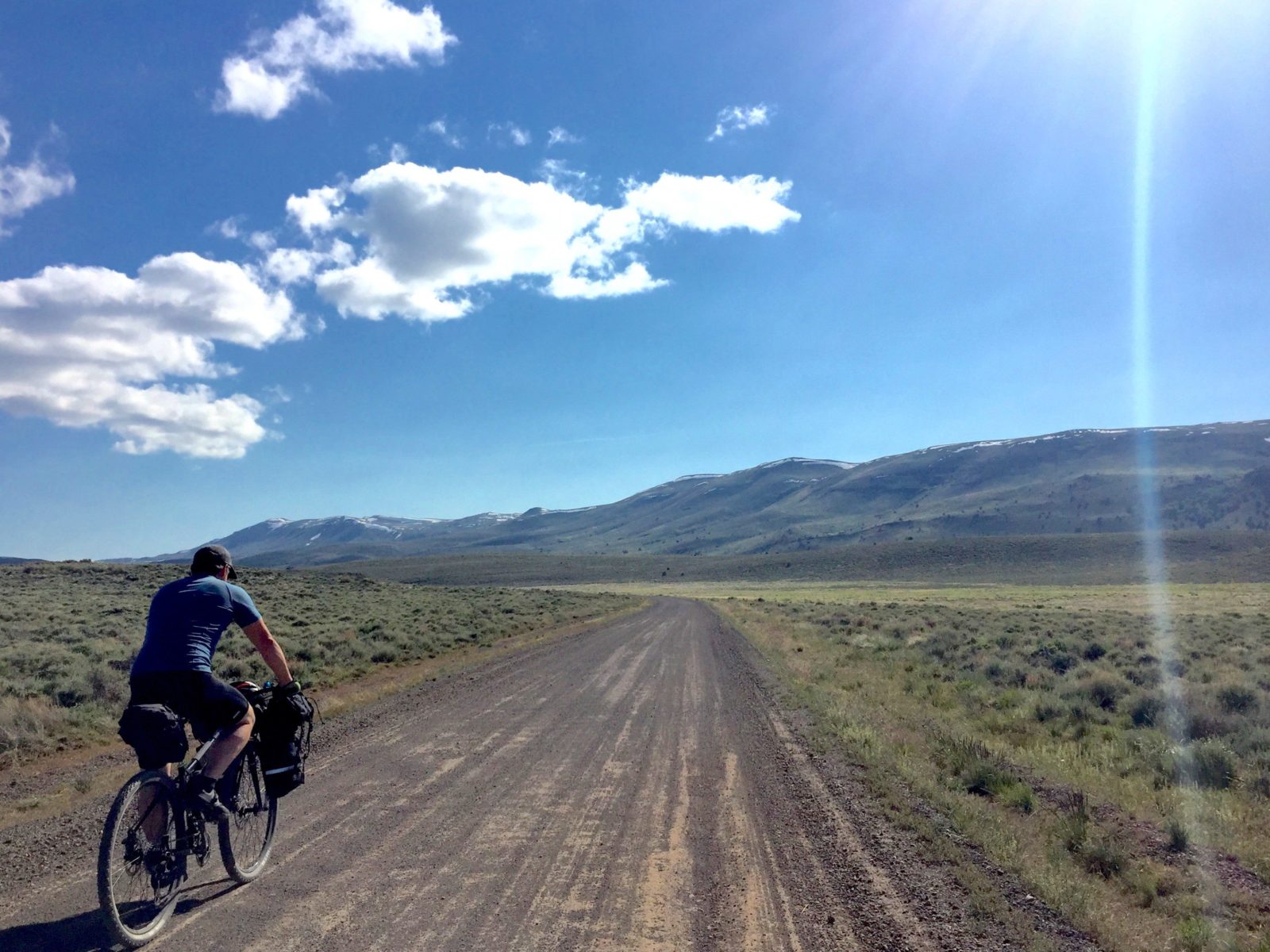 CJ rides through the afternoon sun. 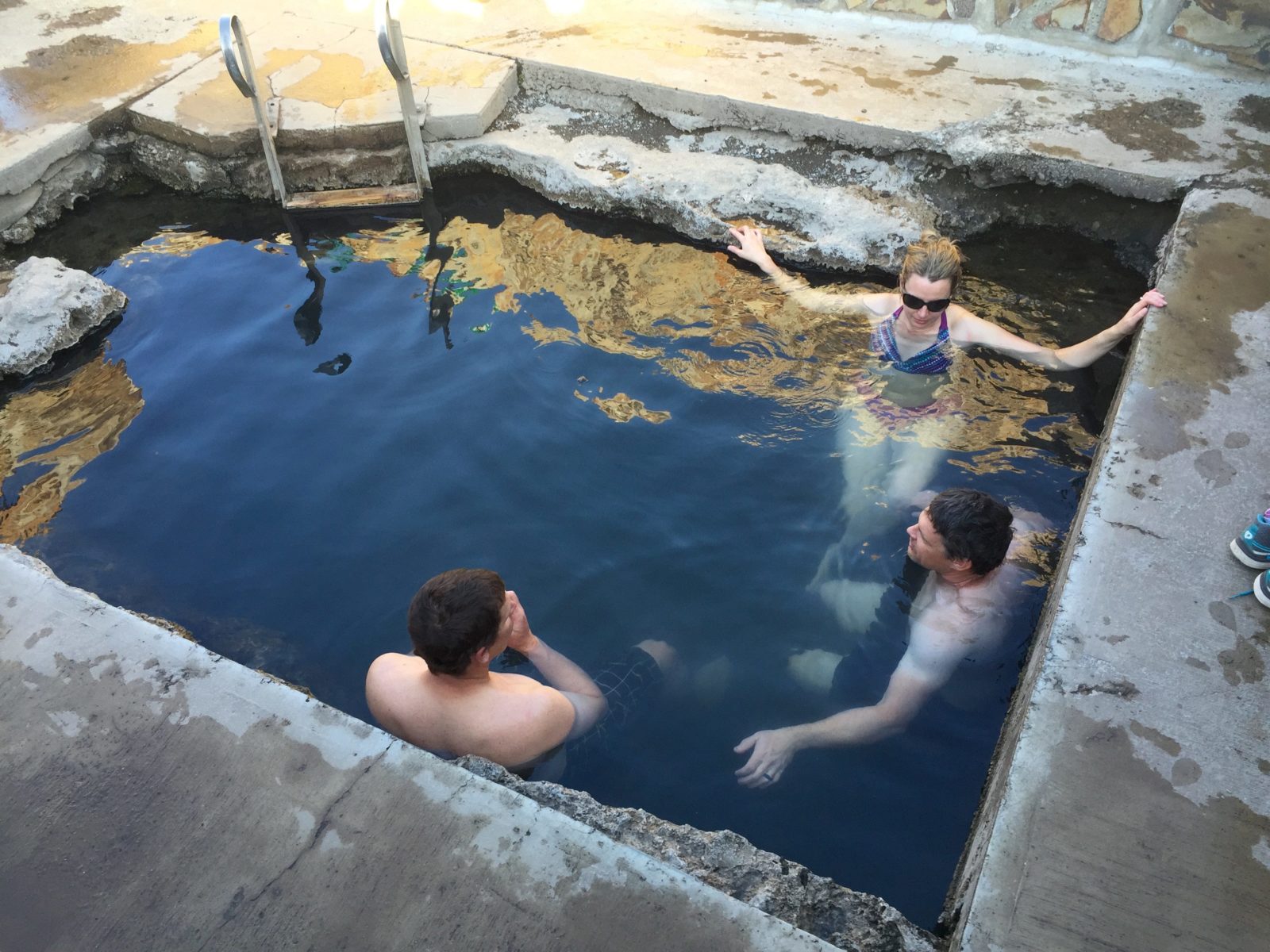 The remains of the day were spent soaking in the hot springs.

The second day took us up and over a divide, peaking out at around 6,500 feet, then down to the next valley below, through the aspens, wildflowers and green meadows. Pronghorn antelope dotted the horizon and sandhill cranes whooped in the distance. That day, we saw one car driving on what were now bumpy, rugged, rocky dirt roads. Our “gravel grind” tour turned into full on mountain biking, which is what we totally dig. Marshy creeks crossed the road every so often to cool our feet off.

Camp that night was in some of the most star laden skies we’ve ever seen. Being in the official BFE, the southeast corner of Oregon is home to some of the darkest skies in the U.S., with little to no light pollution. In the middle of the night, the stars shone brilliantly all the way to the horizon, a full twinkling canvas wrapped around us. 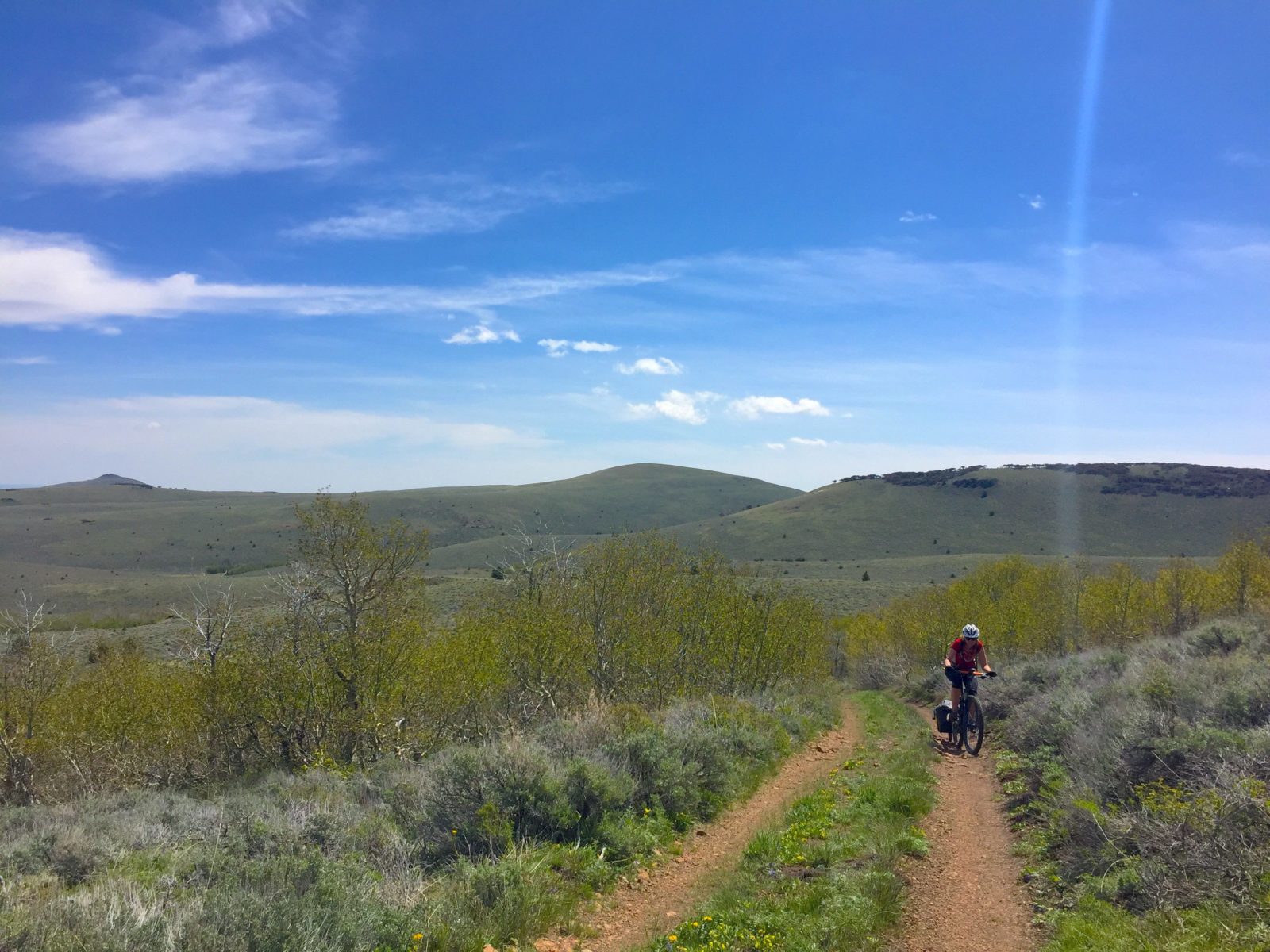 Climbing up to the divide. 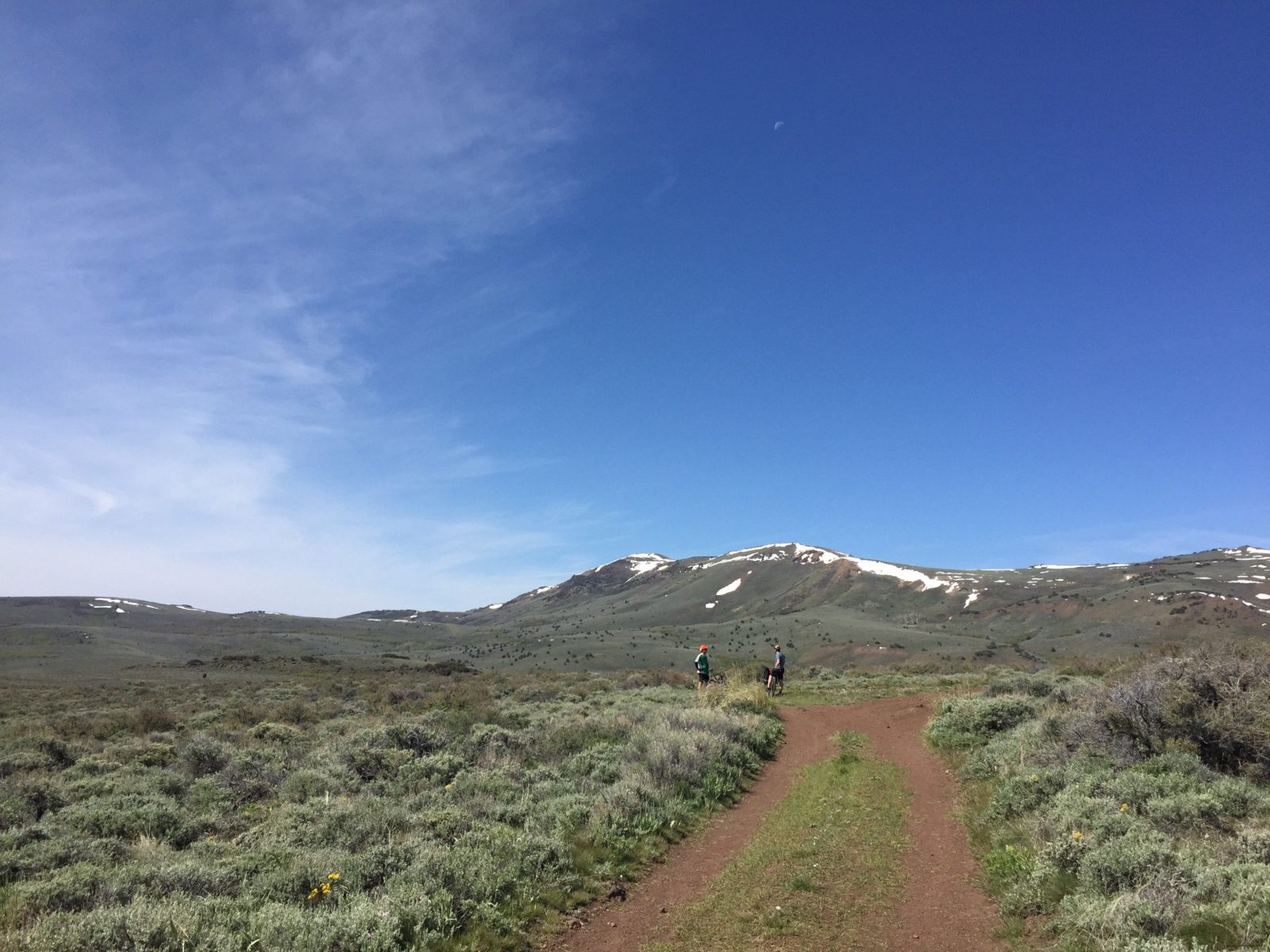 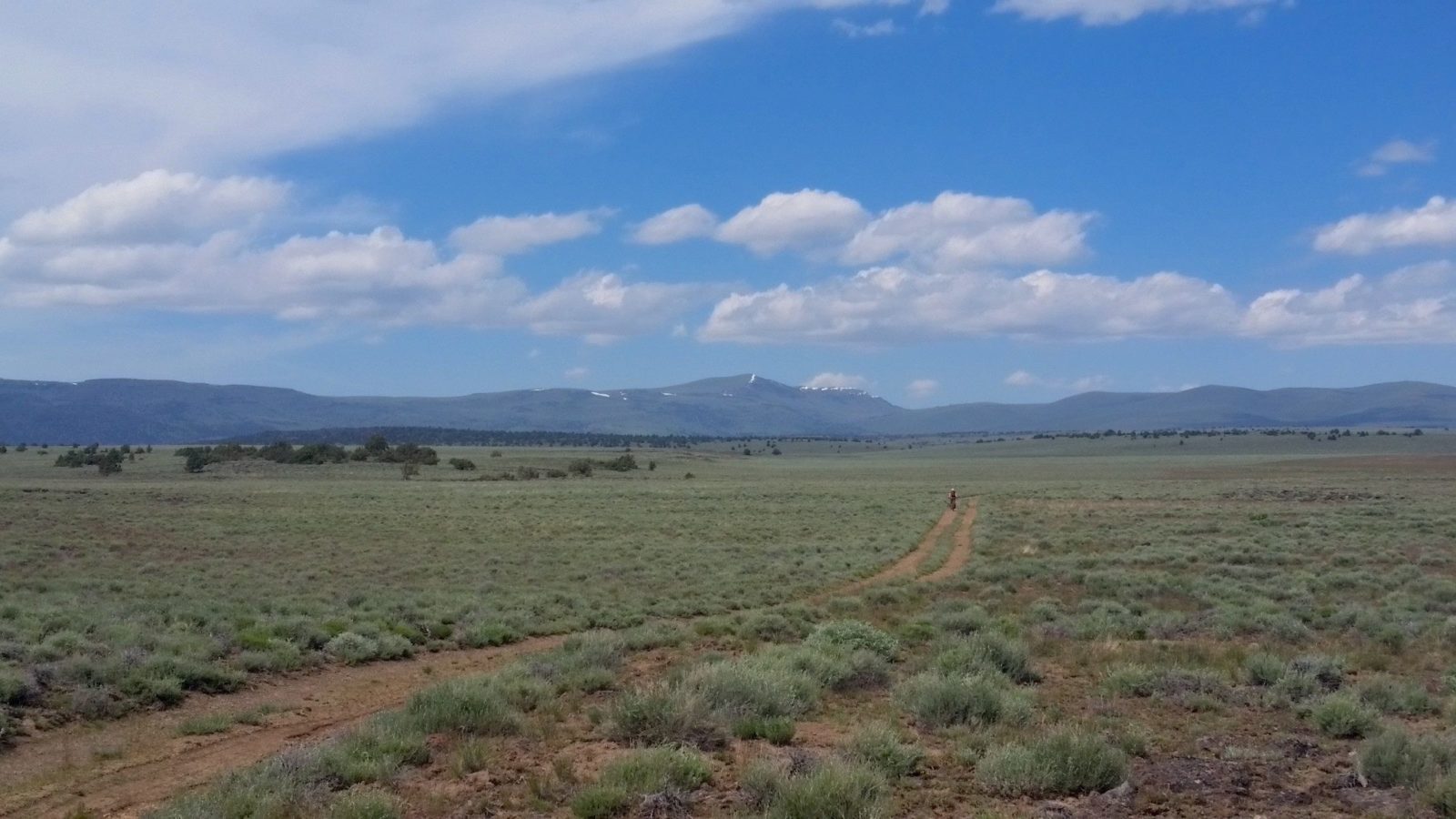 Camp for the night with Sandhill Cranes calling in the distance.

We got an early start since we had to drive home that day after riding. Which is a good thing because about a ¼ mile from camp, I sheared my derailleur off and wrapped it up into my rear wheel. It was a prophetic mix of gnarly mud, a loaded bike and steep, rocky climb which had me grinding hard on the poor thing. After several attempts by Chris and CJ to patch my chain together, I set out to ride the day’s mileage on a singlespeed. The lesson – be prepared to deal with challenging mechanicals while bike touring or bikepacking, especially in the backcountry. And be prepared to work harder than you think you need to. This can make or break a tour.

From the high plateaus of juniper and sage, we eventually descended down a rocky, rowdy doubletrack, shooing cows along the way and dodging snakes in the trail. The views did not end as we rode back down into the lake basin from which we started. The final 12 miles rolled along an old doubletrack that hugged the base of the mountains on one side and marshy lakes on the other. It was an amazing way to end three days in the backcountry. 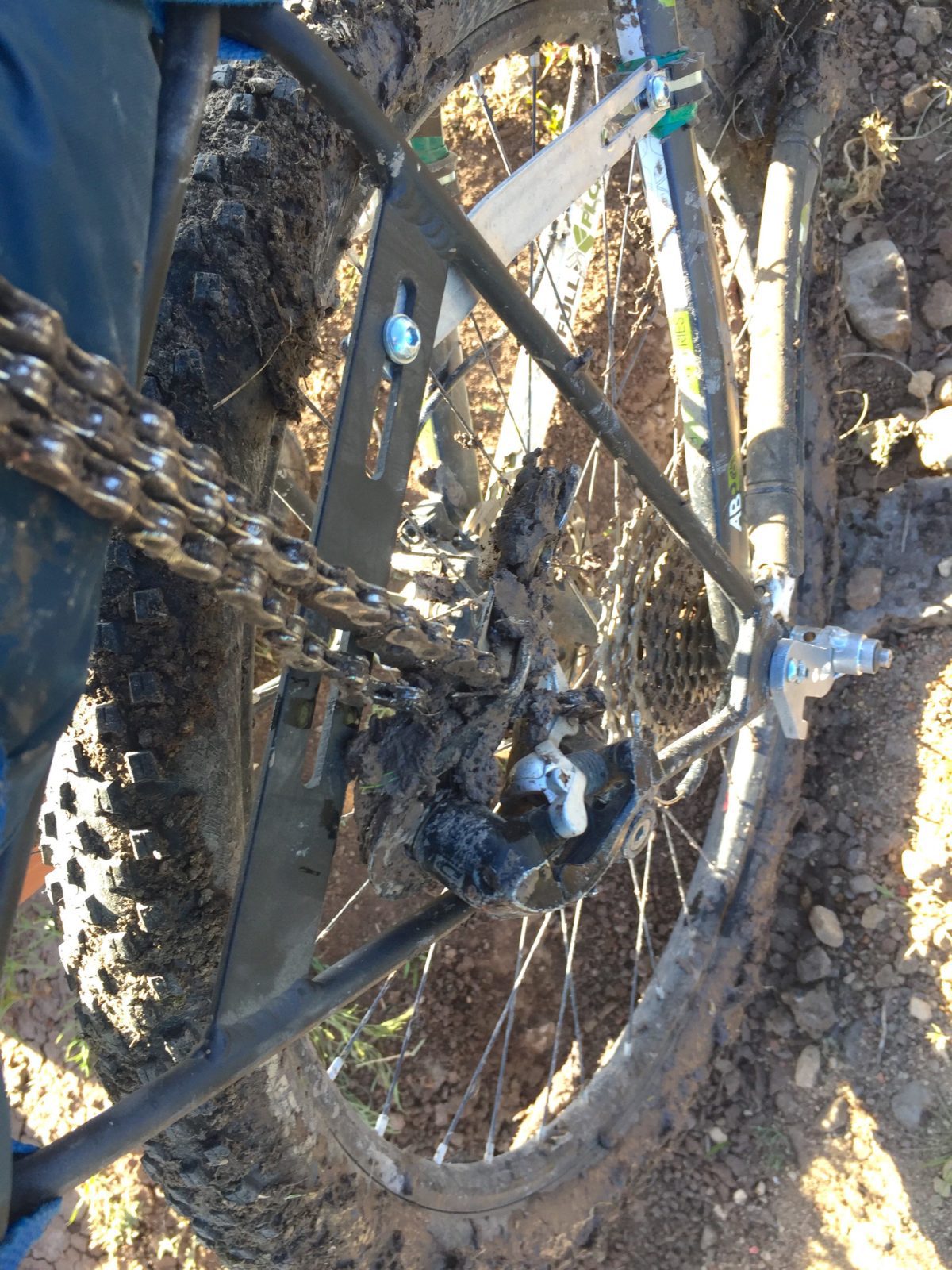 A mess of mud, a snapped chain and a sheared derailleur made for an exciting last day. 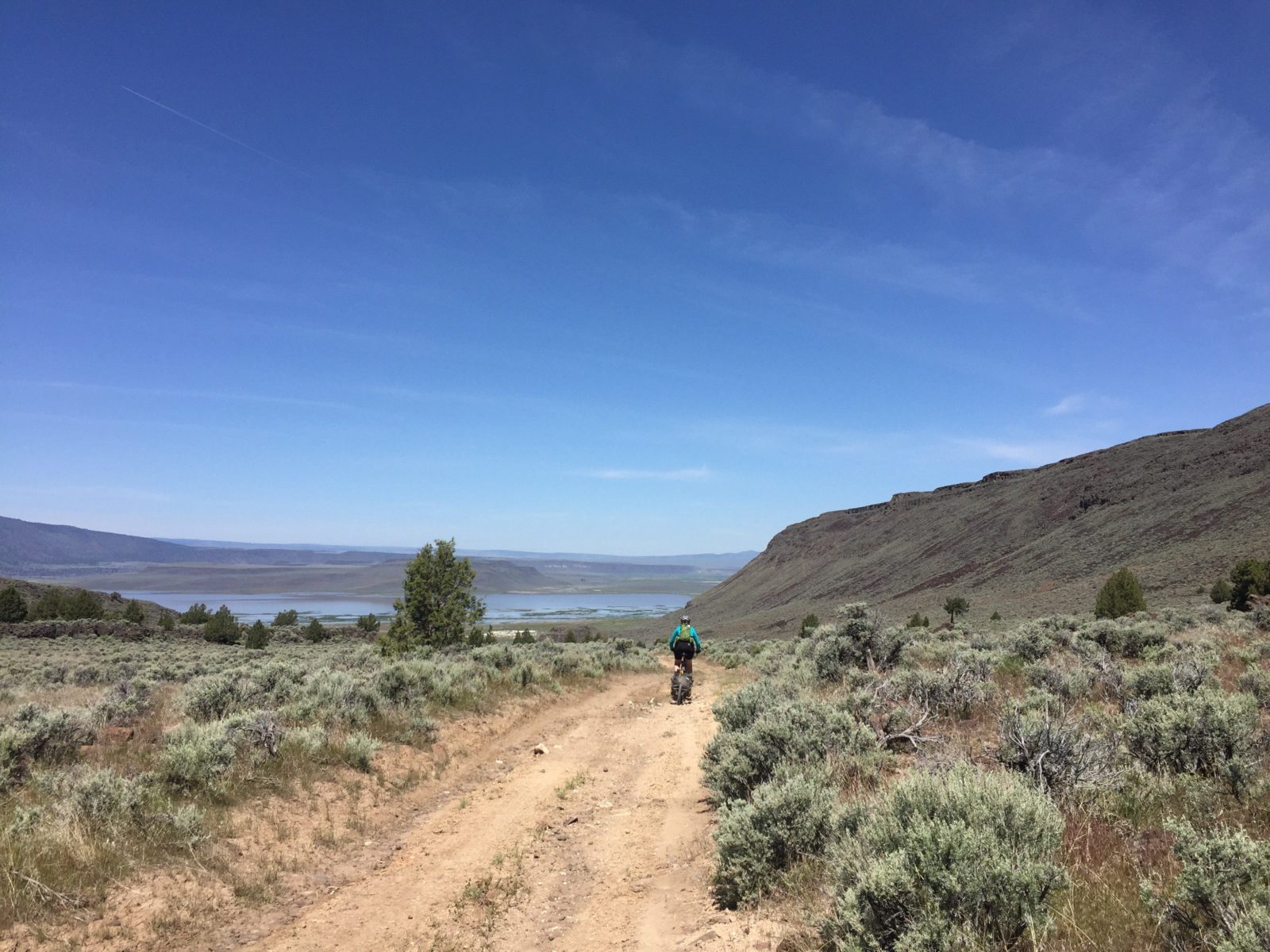 The final descent back to the lake basin on a gnarly doubletrack. 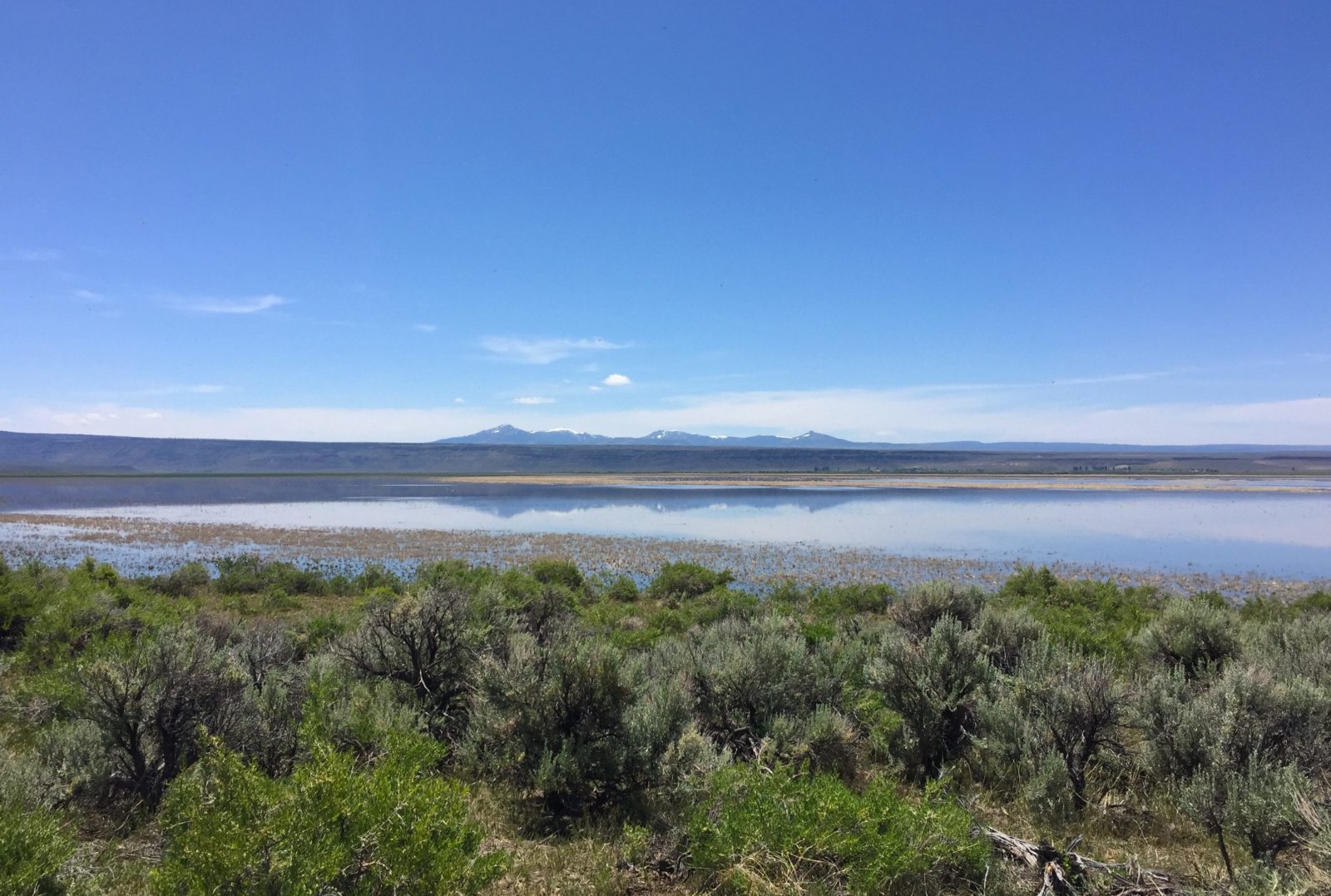 The final sublime view across the basin. 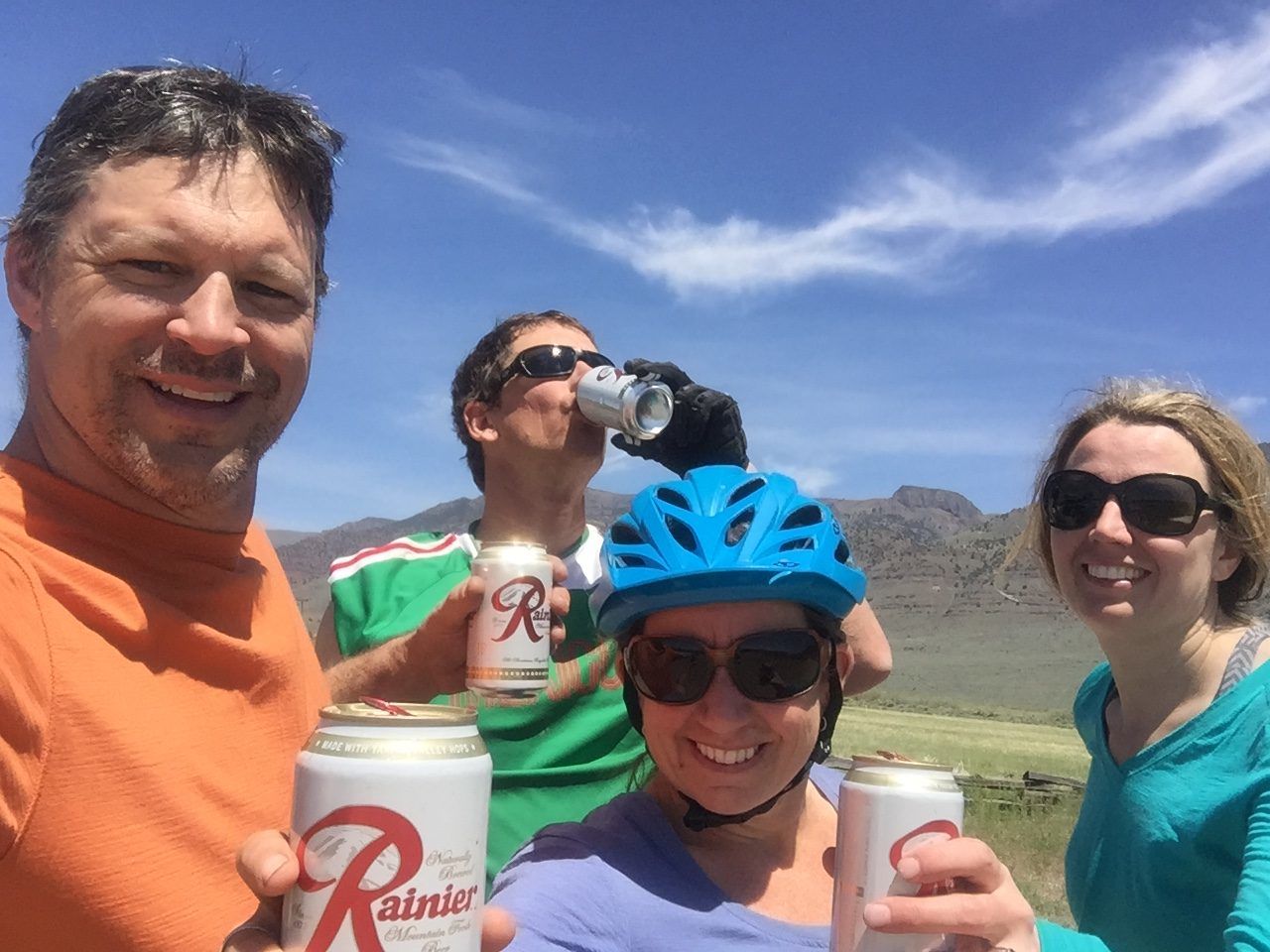 Off road mountain bike touring has this crazy way of hitting the reset button on adulthood. All the worries, stresses, and responsibilities of “life” seem to be left behind. Once you throw your leg over the bike, not much matters except, as my mom would put it “staying warm, safe and dry.” It’s only then that you have the time and space to truly look around.

Here in Oregon, we are fortunate to have places where all sorts of gravel roads and dirt singletrack trails criss-cross the land. Chances are, you do too.

So, what are you waiting for? Stop making excuses. Get on your bike to spend a few nights in some place that is special to you. Have a microadventure. Just go.